Dame Traveler Foodies – unite! Today, we’re sharing some of the world’s coolest and storied cities dedicated to our favorite caffeinated drink of choice. That’s right! COFFEE. For any traveler seriously devoted to their daily cup of joe, this post is for you. Here are ten amazing destinations for coffee lovers!

Of course “the birthplace of coffee” tops our list of destinations for coffee lovers! A true coffee aficionado should learn about the rich history of coffee trade, shouldn’t they? Not to mention, Ethiopia is home to one of the most popular varieties of java – arabica. Ethiopia’s long standing passion for coffee has persisted for many centuries for good reason!

Kona coffee has been described by Mark Twain as “a richer flavor than any other.” And who would dare to disagree with that? The coffee beans collected on Hawaii’s Big Island have been touted as the best in the world, and the tourism around the islands have followed suit. In between surfing and snorkeling Hawaii’s blue waters, you can book tours of coffee farms throughout the islands.

Sure, Seattle is the home of the original Starbucks… and seeing the simple beginnings of the biggest coffee chain in the world is a great homage to your favorite caffeinated drink. But, coffee snobs will be happy to know that Seattle’s commitment to embracing coffee culture goes far beyond that! The coffee scene in the city is alive and well. Plus, Seattle’s notoriously overcast and rainy weather is also perfectly suited for many cups of hot coffee at a cool cafe. Don’t you think?

Coffee has become a huge selling point in this Australian city. So much so that there more than a handful of Melbourne-based coffee publications! Needless to say, Melbourne and its people are truly devoted to their coffee and cafe culture. If you’re booking a trip to this java-loving city, be sure to come during its own International Coffee Expo in late March. Or, if you can’t make it then, book one of Melbourne’s Coffee Tours around the city. You’ll learn more about their cafe culture and history while sipping on local cup(s) of joe!

Colombia’s coffee growing area, “The Coffee Triangle,” has been making waves in the industry. This area along the steep slopes of the Andes mountains is open to tourists who want to learn more about the country’s history of coffee cultivation. In fact, you can even book a hacienda or ranchero to extend your stay and explore the rural side of Colombia. Bogota also has a great cafe scene too!

Kenya’s home to over 56 national parks and has been well known for being the safari capital of the world. But, in between seeing wild lions, elephants and giraffes, coffee lovers can find themselves on coffee tours around the country! In fact, Kenya’s two biggest industries are coffee and tourism. Combine the two and you’ll find yourself touring the grounds of coffee, tea, and flower farms in the worlds most epic landscape. Kenya’s highland soil and sunlight has been its defining factor for coffee growth. It’s time to see for yourself why.

Rome is definitely a romantic city. With a seemingly unending amount of historical relics tossed throughout, you’re going to have to stay caffeinated. Rome’s cafe culture is truly a gem, so be sure to frequent one regularly over an espresso or afternoon cappuccino! You’ll find that each cafe has a life and a story unlike the next.

Cafe cubanos anyone? This caffeinated concoction of espresso mixed with demerara sugar is a dynamite drink in miniature form. If you’re too jittery for Cuba’s tiny powerhouse drink, order a cortadito or a regular brew of freshly ground beans from the Escambray or Sierra Maestra mountains! Not many people associate Cuba with coffee, but truthfully their devoting to java is outstanding.

When UNESCO lists a city’s cafes as “intangible heritage,” you better believe it’s a destination for coffee lovers! Beautiful decor, rich history and fantastic cups of the good stuff? Win-win-win!

Did we miss any coffee destinations you’ve discovered? Let us know in a comment below!

For more of our favorite foodie destinations and fav restaurants, follow us at Dame Traveler Foodie on Instagram.

We’re huge fans of foodie travel. I mean, it’s pretty much the travel trend that everyone can get on board with! Today, we wanted to spotlight some of our favorite foodie cities perfect for any traveler who want to savor more than just a beautiful site or two. Here are eight bucketlist destinations for foodies!

By the way gals, we’re such fans of a beautiful and delicious place to grab a bite, we have our own foodie Instagram page. If you haven’t already checked out Dame Traveler Foodie… hop on it (although, we can’t be held responsible if you start drooling)!

If you’re wondering why Tokyo is at the top of our list of destinations for foodies, experience a morning at the Tsukiji Fish Market for a sushi breakfast followed by an evening savoring the most mouthwatering Japanese cuisines in the crowded and fabled Omoide Yokocho.

Between warming and savory ramens, thick udon noodles, the freshest sushi you could ever imagine and the unmatchable traditional Japanese meals, there is no other place to eat like Tokyo. Have you ever been to a robot themed restaurant? How about one that focuses on one animal only? Have you ever sipped on matcha tea while playing with friendly felines?

The city’s chaos and absolutely killer attention for detail is just part of the romance here. Get swept away by the Japanese flavors in this bustling city!

Sure, it’s an obvious choice. But Paris surprises us foodies over and over again! Its classics are absolute perfection, bar-none. We’re talking french onion soup that will blow all other competition out of the water, fresh crepes made on a blustery day and pain au chocolat that could make any sweet tooth bow down. Plus, the nostalgia of languidly sitting at a Parisian cafe over a croissant in the morning is just too good! The French’s most famed foods are well loved for a reason, so you should experience them at their absolute prime. Right?

And on the other side of the coin, Paris’s young and innovative side of culinary exploration is mind blowing. New chefs are creating fresh twists on foods unlike any other place in the world.

The most delicious lunch in one of the most aesthetically pleasing spots in Paris- @bigmammagroup’s Pink Mamma! #dametravelerfoodie #dametravelerparis 🇮🇹 ♥️ 🇫🇷 #pinkmamma

This city in Italy is translated as “the fat” – and it’s for good reason. Italy gave the world pizza and pasta, and yet Bologna gives visitors that and more. Bologna is perfectly situated between the mountainous regions of Italy, as well as the sea. What does that mean for us foodies? It’s the perfect meeting place for kickass Italian food!

The exceptional food here can be found in unexpected places, especially in its alleyways flooded by locals. Chow down on the best charcuterie of your life, featuring Parma ham, proscuitto, parmesano cheeses and olives (and truffles!) for a meal and thank us later. As one of our leading destinations for foodies, Bologna has yet to disappoint us with its authentic and amazingly simple and fresh treats.

It’s the melting pot of the world, and it also is the melting pot of culinary flavors. New York is stocked FULL of new age multicultural gems, as well as historic classics. From traditional Jewish delis to the best slice of pizza to specialized treats that tourists flock to, New York has it ALL.

The food scene is so competitive (and delicious) here in the city, that its said that a bad restaurant won’t last longer than one yearly season. That means no horrible tourist-trap foods for you! We suggest getting off the beaten path and nixing any large name restaurant brands while here. If you’re looking for our favorite recommendations, be sure to check out our categorized hashtags – #dametravelerfoodie and #dametravelernyc. There you’ll find our fave restaurant jaunts!

Throughout each providence of Mexico, you’re bound to find traditional flavors and dishes unlike the next. However, we’ve found that Oaxacan food touts some of the most interesting and authentic flavors in all of Mexico! Oaxacan food is diverse, which for a traveler is a total win-win. On any given calle in Oaxaca, you’re bound to find flavors from Mesoamerica, Hispanic influences and street food that is out of this world. Spicy salsas, complex, rich moles, slow cooked soups, chiles and tacos, what isn’t there to love? If you’re feeling adventurous, try the crispy fried grasshopper!

Bangkok might be the obvious choice for experiencing Thai food, but we have something even better up our sleeve. Chiang Mai is the northern city of Thailand so riddled with foodie gems, it’s too good to pass up! Racing through the calm streets here via tuk-tuk, you’ll find street vendors and weekly street fairs stocked with smells and flavors that will send you reeling. In fact, some street vendors in Chiang Mai have created a celebrity following here. You’ll find locals and expats lined up for one dish for blocks if they’re exceptionally good!

Be sure to try the Thai classics like pad thai, mango sticky rice, spicy papaya salad and tom yam soup. But also, make an extra effort to try the northern classic – a bowl of khao soi. This egg noodle dish is stacked with pickled cabbage, shallots, spicy thai chiles and pork… and you’re bound to fall in love!

This southern city in America is known for indulgence – in drinks, in revelerie, in excess fun. But, New Orleans has a foodie scene unlike any other American city! Families have been perfecting the art of their Louisiana classics for generations now, which means for some awesome meals for us travelers. From gumbo to shrimp poe boys, freshly shucked oysters to deep fried alligator – the adventurous eater will be flummoxed with options in New Orleans!

Most people think of English food in terms of pub classics like fish and chips and chicken pies. However, London’s foodie scene has become increasingly cooler and more innovative throughout the years. Young chefs have been completely shifting the focus of culinary treats in London, and that means more delicious flavors for the average traveler. Sure, you’ll still be able to nip into a pub for an English classic, but you’ll also find multicultural options galore and some of the best food markets in Europe!

What cities are on your bucketlist for delicious bites? Have you ever traveled to a place specifically for their food? We’d love to know!

Don’t forget to join us on our foodie journeys on Dame Traveler Foodie! 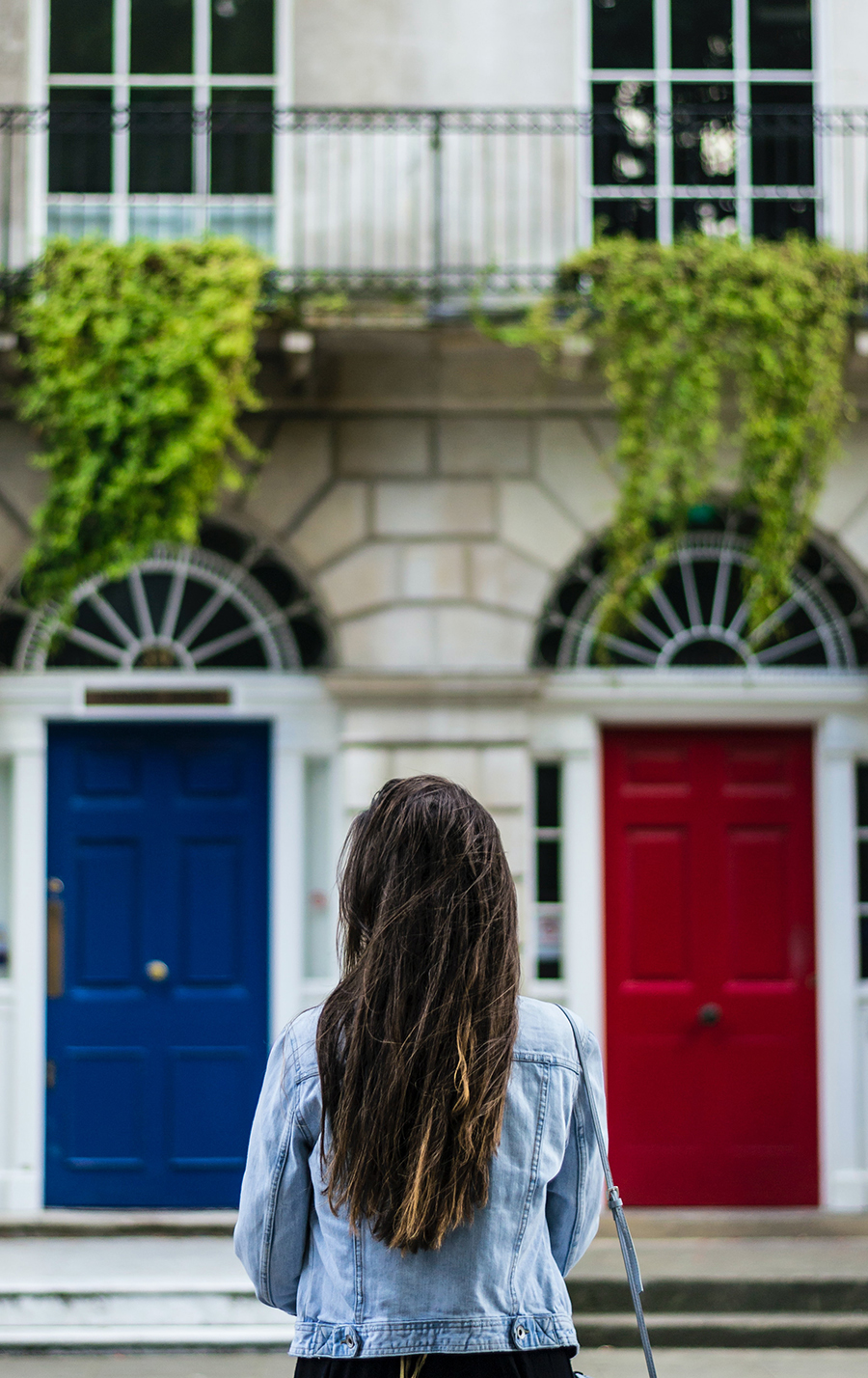 Tips for a First-Timer Visiting the United Kingdom

Far Out Destinations to Get Your Imagination Running